​From Farm Boy to Airplane Designer and Manufacturer: The Life of Allen Meyers

Al Meyers is a special example of a passing era in United States history. He is one of the few remaining examples of the American legend – a poor farm boy who rose from the ranks. He was almost self-educated in his field, single minded of purpose, and to this was added a tremendous drive. Allen H. Meyers was born in Allenhurst, New Jersey on September 4, 1908. When he was about nine years old, the family moved to a farm in upper New York state near Middleburg, at the foot of the Catskill Mountains. His mother and father were of Swiss origin, and this countryside must have reminded them of their homeland.
Al's father was a graduate mechanical engineer of ETH, in Switzerland, similar to MIT in the United States. Al cherished his father's engineering drawings and notebooks, more than 100 years old, done in the beautifully trained style of that period. Al was tremendously influenced by his father's early training, even if he rebelled at milking cows every morning at five A.M. Later as an adult, he had difficulty drinking milk.
He was an active, athletic boy: he, his brother, and sister walked five miles a day, each way, from their farmto the Middleburg school. He suffered from childhood asthma, and would often stop to catch his breath, as he sat in a snowbank during cold winter days in the mountains.

He learned to snowshoe and trap animals in order to help the family's meager income. Food was plain, mostly what they raised - meat, bread, fruit, and milk - no frills. He graduated from Middleburg High School in 1926.

Sometime during his boyhood he became fascinated with airplanes. His farm was just below a favorite skyway of early pilots. In the summer he would lie down in the fields to watch the marvelous machines fly by with their brave and daring pilots. Even though the family was isolated, stories of World War I flying captured the boy's imagination. The Charles Lindbergh flight sealed Al's will to fly.
Before he had graduated, he enlisted in the National Guard and took his summer's training at Plattsburg, New York, 1925-26. It was there he went up in an airplane for the first time as an observer, in a Consolidated Biplane, with a Liberty Engine.

After graduating high school, he taught for one year in a one-room schoolhouse. Each weekend he walked or snowshoed through he hills eight miles to be home for good food and friends. All this time, the plan for his life's work began to take shape. He wrote dozens of letters trying to find a college or school where he could study aviation. But aviation was still too young, and there was no organized curriculum available. He was offered a scholarship in forestry at Cornell University, Ithaca, New York. Although it was an hour and a great temptation, he turned it down in favor of apprenticing with the pioneer airplane builders such as Chance Vought, Glenn Martin of Baltimore, and Stinson Aircraft Corporation of Wayne, Michigan.
​ 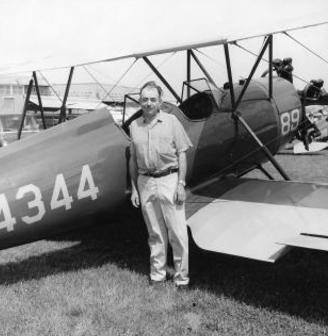